I could probably call this post "How Not To Decorate a Cake". I made many mistakes this time around but I'll explain as I go. 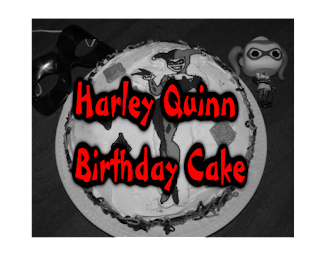 For the past few years I have made my own birthday cake in the theme of something I am like. Last year Hunger Games, before that Logan's Run and a Tardis cake. I had planned on having an Avengers theme party this year but that just wasn't going to happen. Instead I decided on Harley Quinn. I thought it would be a perfect theme to attempt my first ever icing transfer.

First off I love to bake but things tend to go wrong. A little bit of the edge on one of the cakes burned, but I just cut that off and frosted anyway. 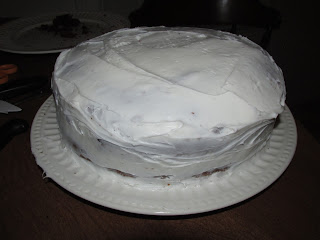 Can you frost a cake better than that? No, really, because I can't seem to.

To make an icing transfer you need the pic you want to copy taped on an old baking sheet with wax or parchment paper taped over that image. I didn't have wax or parchment paper so I went with plastic wrap. This was the first incident where I substituted things I shouldn't have.
I had two containers of white icing but I  used all of one and a little of the second one to ice the cake itself. I took the remaining icing and divided into three; one for red, one for black and one for white.
Here is the 2nd bad subsitution choice I made. Instead of using pastry bags like any sane person would, I used small ziploc bags with a hole cut out to put the couplers in to attach the tips. As I started piping the icing it oozed everywhere. 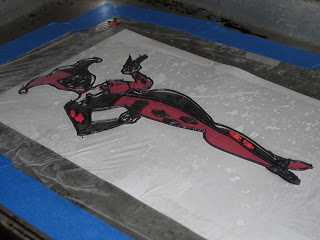 I piped the outlines and details first including the diamonds in both red and black before putting the baking sheet in the freezer for a few minutes. Basically any detail that needs to be on the surface of the image goes on first. 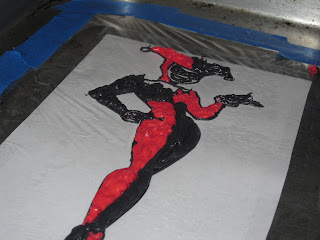 Then I filled in the larger parts in black and red. This is when the icing started to fight back and I ended up making some gaps in the image that I didn't see until it was too late. After this step back in the freezer. 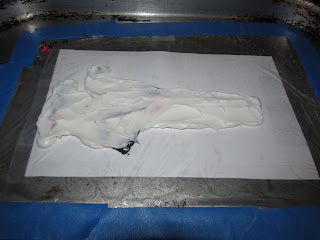 The final icing part. Building a thick layer of icing all over and around the transfer image. This is where I ran out of white icing and tried to spread it out as far as it would go without getting it too thin to move later.
And once again back into the freezer. I let this sit about 30 minutes this time. 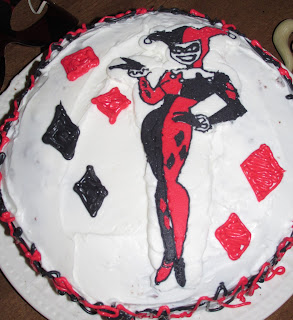 Carefully taking off the tape from the plastic wrap and flipping the transfer on the cake was daunting. Once the transfer is on the cake you cannot move it. I lucked out here and it landed roughly where I wanted it.  I was relived as I remove the plastic wrap that it did not fall apart in the final steps. I added the black and red diamonds after.
I am pretty proud of this cake. Is it perfect? Nope.
I ended up with a nice birthday. I played video games and watched American Horror Story: Asylum with my mom. Both of my parents were with me when I blew out my candles. Not a bad birthday at all.