This week on 5 Fandom Friday it is 5 Fandom deaths that I am still upset about. Thanks once again to The Nerdy Girlie and SuperSpaceChick for these lovely weekly prompts.

1. Amy and Rory
I have said it before I know, but I love the trio of the 11th Doctor, Amy and Rory. For me they just worked. So of course having that trio broken up was upsetting, even though I knew they actors were leaving. I am glad that Rory and Amy managed to stay together and live out their lives, but watching 11 lose them was brutal.
Raggedy man, goodbye

2. Toshiko and Owen
The end of the second season of Torchwood concluded with the deaths of Tosh and Owen. Tosh is dying of a gunshot while talking to Owen as he is about to die from nuclear radiation. She doesn't tell him that she is dying as he is venting his anger and fear at her because he knows that he is going to die. She stops this rant by saying "he is breaking her heart". They say good bye and Owen says "It's okay, it really is." Which is word for word what Tosh says in a recorded message found by the others after her death, as well as a confession of her love for Owen.
The feels! 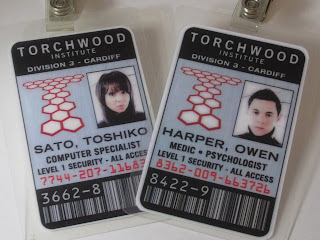 3. Wash
The movie Serenity ties together many loose ends for the series Firefly, but at a cost. Funny, sweet and playful Wash dies from a harpoon launched from the Reever ship. This death is really upsetting because it comes without warning. He doesn't even get a chance to fight back.

4. Beth
The Walking Dead is a show where anyone can die at anytime. Basically watching this is like putting yourself through hell weekly but I can't stop. Beth was a character that I was really starting to like. She started out weak then went a bit strange ie oh my boyfriend's dies...too bad. But after that she started to become a stronger character, her time alone with Daryl was really great to watch. She become a survivor because of him and she brought out some good qualities in him. So of course she has to die. And to be killed by a delusional cop. I still hate you Dawn, I'm glad Daryl killed you

5. Paul Ballard
Having finally binged watched Dollhouse I was shocked by the death of Paul. It happened so quick and without much reaction from anyone at the time, even Echo. Yes I know they were running for their lives, but wow. Later Echo mourns and has his memories and personality implanted to keep him with her. Better than nothing, I guess.

Honorable mention: Fred from Angel. Whedon I love your work, but come on.