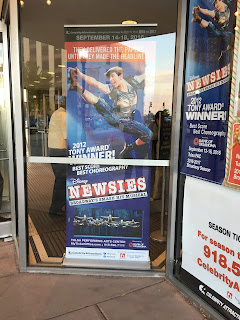 It feels like forever since I have be able to see a touring company musical.
I managed to win tickets to the full 2016-2017 season at the Tulsa PAC.
The first musical just happened to be NEWSIES!!!
I loved the movie (added points for featuring actors from RoundHouse). When I saw the Tony awards a few years ago that had a Newsies performance featured I knew I needed to see this show. 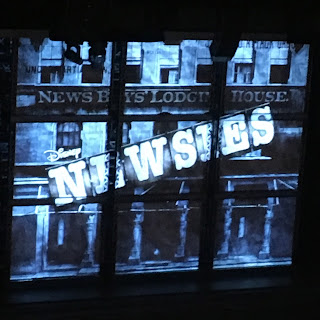 The musical changes some things from the film. Instead of Bill Pullman's reporter helping the boys out it is actually a female reporter that replaces Davey and Les' sister and becomes the love interest for Jack Kelly.
The music is great. All the songs that I liked in the movie are made bigger and better. All of the new songs feel like they should have always been there.
But the main attraction with Newsies- the DANCING
Just wow!
These actors kill it. They even dance during scenery changes so that there is never a lag in the show. Let me just say that I expected some amazing dancing but I was still blown away.
I want to take dance classes now. 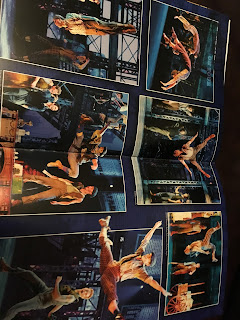 Of course going to a musical would not be complete without getting the program.
From what I understand, this national tour is almost over. The last stop will be in Austin, TX. But there is some possible good news.
A live performance of Newsies has been recorded in LA which means that it may end up being released to DVD. This has happened with RENT, Cats, Shrek, Into the Woods... so there is hope that Newsies might be available to own. If this happens I would recommend getting a copy.