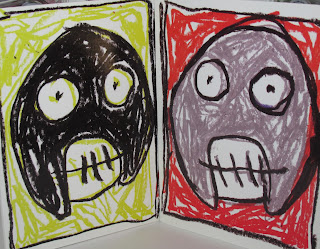 The Mighty Boosh is a TV series I almost never knew about and that would have been a tragedy. Like many things my love of Placebo brought this to my attention in a roundabout way.
There was a British quiz show called Nevermind The Buzzcocks that featured musicians and comedians. Brian Molko, of Placebo, was a guest panelist a few times. He was perfection as usual. Unfortunately this show is no longer on Youtube and cannot be seen in the US that I know of.
Back to The Mighty Boosh. In the later seasons of the Buzzcocks, Noel Fielding was a team captain. Fielding is Vince Noir ( among others) in The Mighty Boosh.
Like the Buzzcocks, The Mighty Boosh is pretty difficult to watch in the States unless you buy the DVD (or are techie enough to find other ways). I bought the DVD...and it came with stickers! 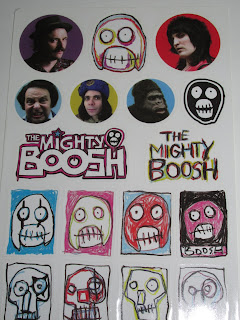 This show is absurd, weird and completely wonderful. Just look at Noel Fielding's hair and tell me it doesn't make you happy. This show reminds me a little of Monty Python's Flying Circus at times, yet it is its own entity.
The show focuses on Noel Fielding's Vince Noir and Julian Barratt's Howard Moon. Both Fielding and Barratt play many different characters through the show. My favs are Fielding as The Moon and Old Gregg. I have quoted, in character, Old Gregg to people and received some strange looks.
"Do you love me? I drank Bailey's from a shoe...creamy"
One of my favorite things about this show is the random songs. The song from Call of the Yeti is so freaking fantastic.
Other characters include Bollo- the gorilla, disgusting Bob Fossil, evil Dixon Bainbridge and darling Naboo.
If you have never seen this show and by some chance get an opportunity, WATCH IT! It is delightfully odd.
And this brings to one of the reasons I am writing this post. There are so many brilliant British shows that are nearly impossible to see in the US. BBCAmerica doesn't show series like this anymore. In fact, most of BBCAmerica is blocks of Star Trek Next Generation, Top Gear and Kitchen Nightmares. WHY?
There are so many amazing series that BBCAmerica could be showing. Even some of the older series too, like Ab Fab, My Family, Are You Being Served...I really could go on here. The only way to watch some of this kind of programming is if your local PBS stations puts them on or if you buy really expensive DVD sets, most of which are not region friendly for the US.
Come on BBCAmerica, you can do better.