There is a symmetry to my seeing Star Trek Beyond in the actual movie theater. The last film I saw in an actual movie theater prior to this year's Captain America: Civil War was Star Trek (2009). Absolutely loved it. Went on a quest to all the Burger Kings in Tulsa to find all the promo glasses, which I still have in their boxes. Since my mom and I have been on a roll this year in going to see movies this one was a no-brainer. 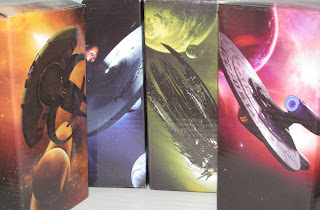 I don't like to write full synopsis in my reviews, wikipedia does it better, instead I will tell you what I liked and possibly what I didn't like about this film. There will be spoilers.
-----------------------------------------------------------------
By now we know the main crew in this Star Trek alternate universe, still in this film there is more time spent on some characters that needed a bit more fleshing out. Included in this are Scotty, Sulu and Chekov. They are given more screen time and have more to do compare to previous films. Something I really enjoyed was the mix matched pairing that happened; Kirk & Chekov, Spock & Bones, Sulu & Uhura and Scotty with new ally Jaylah. This gave the characters and actors a chance to expand themselves in the circumstances and change up the chemistry between actors. I must address that in the light of the recent passing of Anton Yelchin (Chekov) it was nice to see him have a good amount of screen time especially with Kirk.
Idris Elba's Krall was a really good villain. I did not recognize him until the end. (BTW I tried to go into this film as uninformed as possible of spoilers and casting. I thought it would be interesting to see it that way).
My favorite parts included every scene with Spock and Bones. It might just be that I love this version of Bones no matter who he is with. My mom really liked the scenes with Scotty and the new "Lassie" Jaylah. Honestly I really liked Jaylah. Kirk will always have to rescue a damsel in distress, because he's James T Kirk, but at least Jaylah holds her own for the most part. Should the Star Trek reboot series continue I would like to see her involved with the Enterprise crew. Perhaps she can take up the mantle that will be left by Chekov. I do wonder if they will make more of these films. They could end it now as a trilogy. And continuing on after the loss of a main actor will always be difficult.
Back to the film. For a two hour film the pacing is pretty good. The action scenes are a bit difficult to watch on a movie screen. A little disorienting but not so bad that it ruins anything. Maybe a film about space needs the audience to feel disoriented.
My mom's only complaint was the "trite" building up to the show between Kirk and Krall and that Kirk could have taken him out earlier. This is where we differ. This is an action/ sci-fi film. It needs that tension. The buildup and the showdown. And Kirk has to give the villain a chance to do the right thing because Kirk is a hero. Yes Kirk had the opportunity to stop him but would he still be a hero if he did that? Not to Kirk himself. He must give every chance for redemption, that is who Captain Kirk is.
Basically to sum it up. I loved it. Go see it.
Dammit Jim...