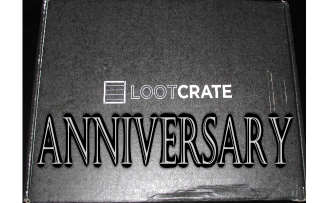 Lately I have been in what I like to call the December Void. Where the holidays, cold weather and countdown to the end of the year send me into a procrastination rut in which all I want to do is curl up in an electric blanket and watch Netflix or nap.That is my only explanation for my sporadic or non existing posts.
Luckily my subscription boxes arrive and remind me to write something.
With that being said... this month's Loot Crate has arrived.

Loot Crate is a monthly subscription box for the geeks and gamers. Each month has theme and for December the theme is Anniversary in honor of a couple of big fandoms having their anniversaries this year. Ghostbusters turned 30, Batman is 75, Marvel turned 75, Simpsons turned 25 and Tetris has been around for 30 years.
Anyone else feel ancient?!
Let's get started with the best of the crate 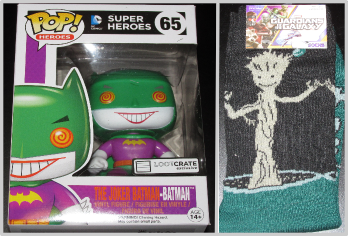 Loot Crate announced that this crate would include an exclusive Funko Pop. I love this Pop. It is a Joker-Batman hybrid. This is my favorite item this month. Just look at the Joker grin on Batman's body.
My other favorite this month is some Baby Groot socks from Marvel's Guardians of the Galaxy. I'm going to give these to my mom for Christmas because she will love them. 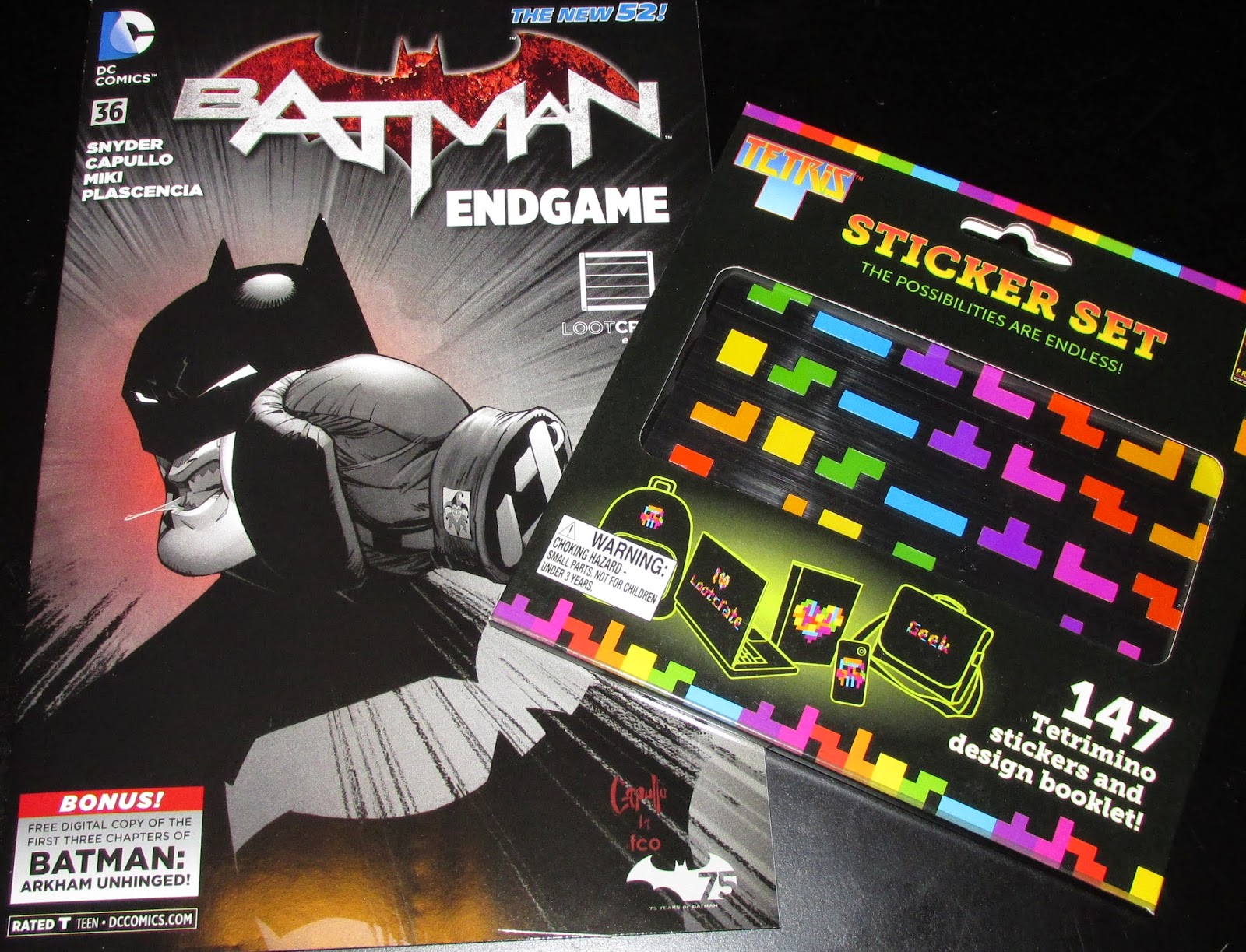 Sticking with Batman again is an exclusive variant cover of a Batman Endgame comic.
For the Tetris anniversary we got a pack of Tetris stickers. I will use these. 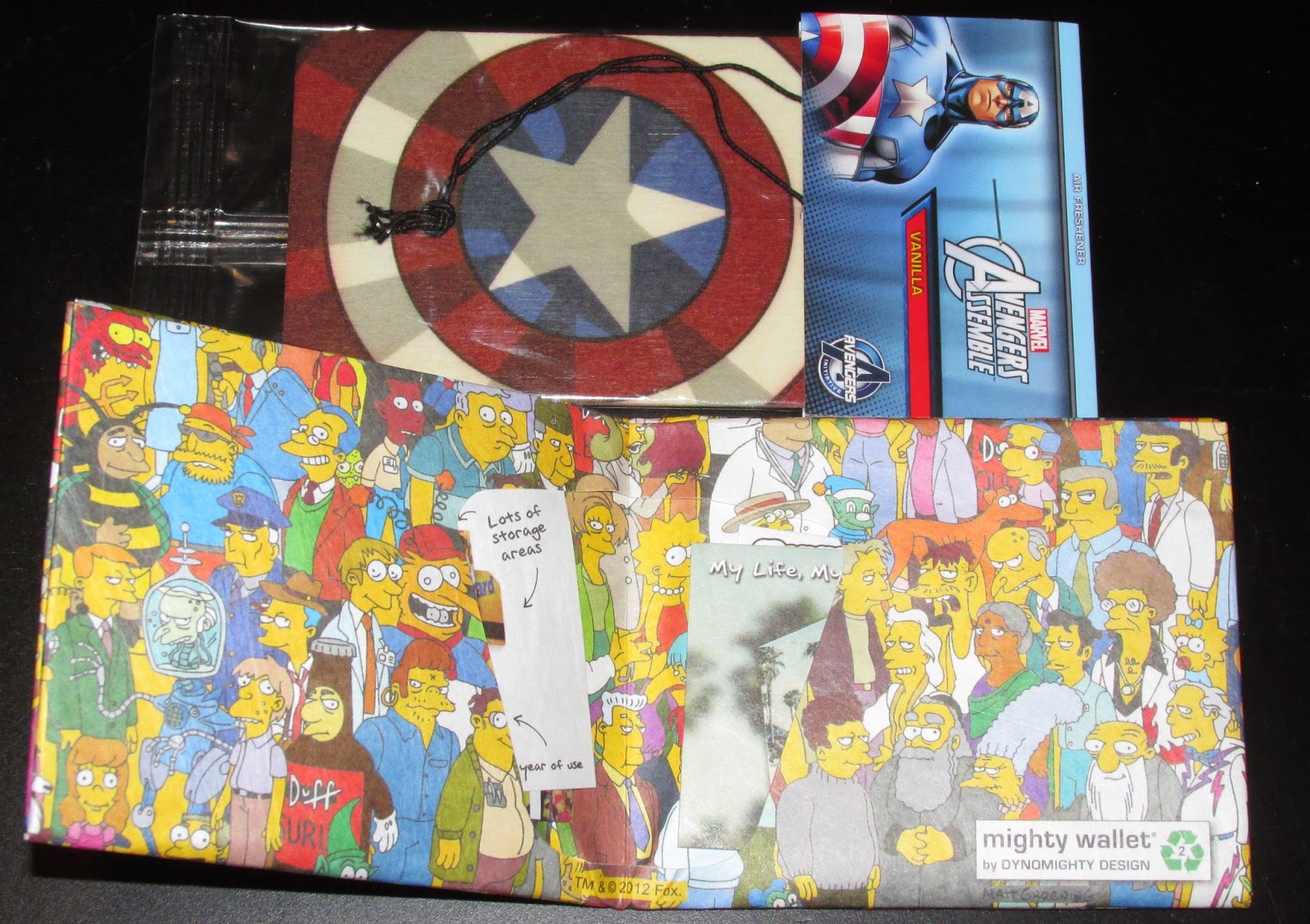 Another Marvel item is the Captain America air freshener in vanilla. It's nice, pity I still don't have a car : P
Since the Simpsons turned 25 this year Loot Crate included a Mighty Wallet with every Simpsons character on it. This will go to my dad for Christmas. 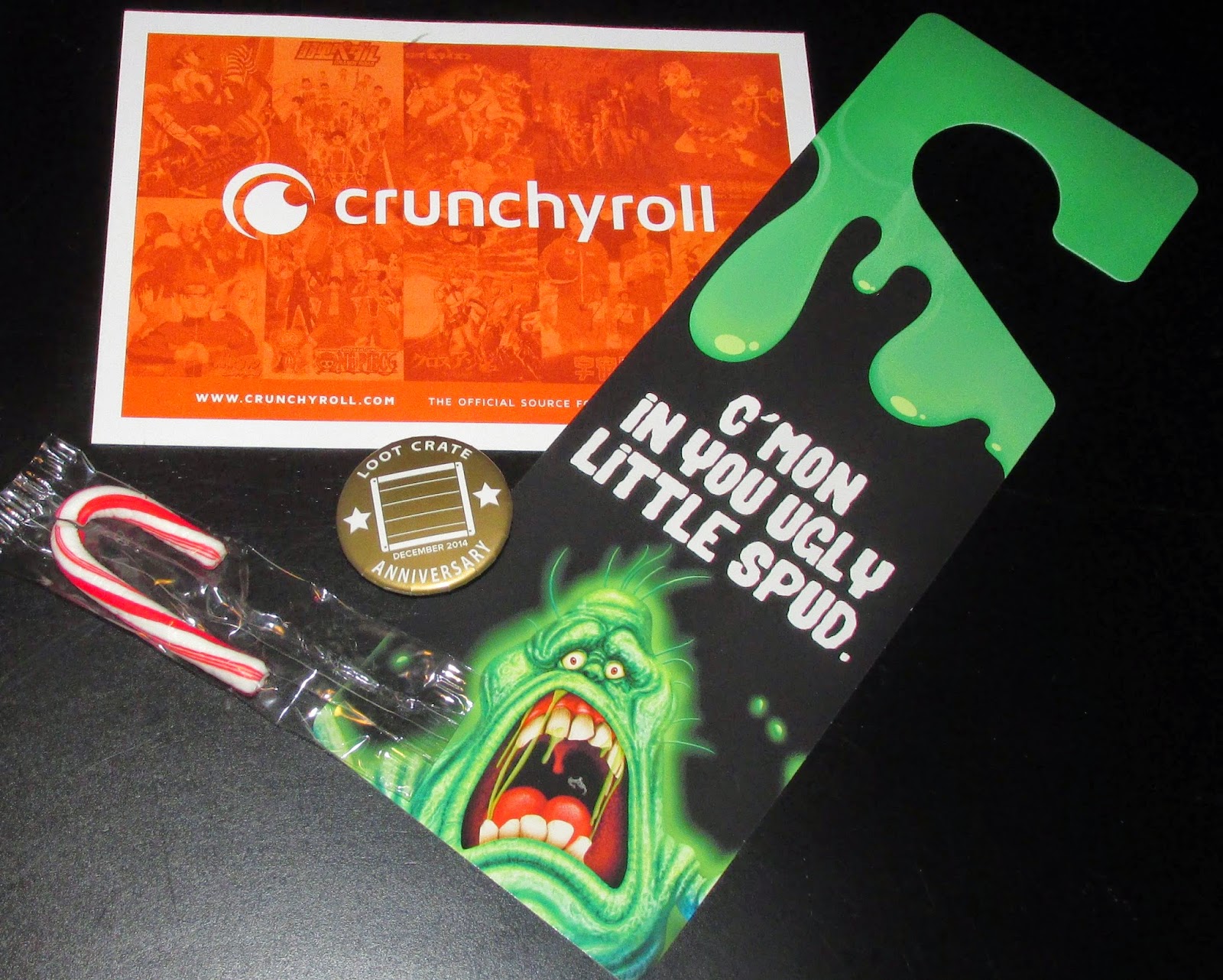 Also included this month is a 30 trial of Crunchyroll for Anime. The monthly button and a candy cane.
I must admit I am disappointed in the Ghostbusters item. I love these films and really hoped for something a bit more than a door hanger. 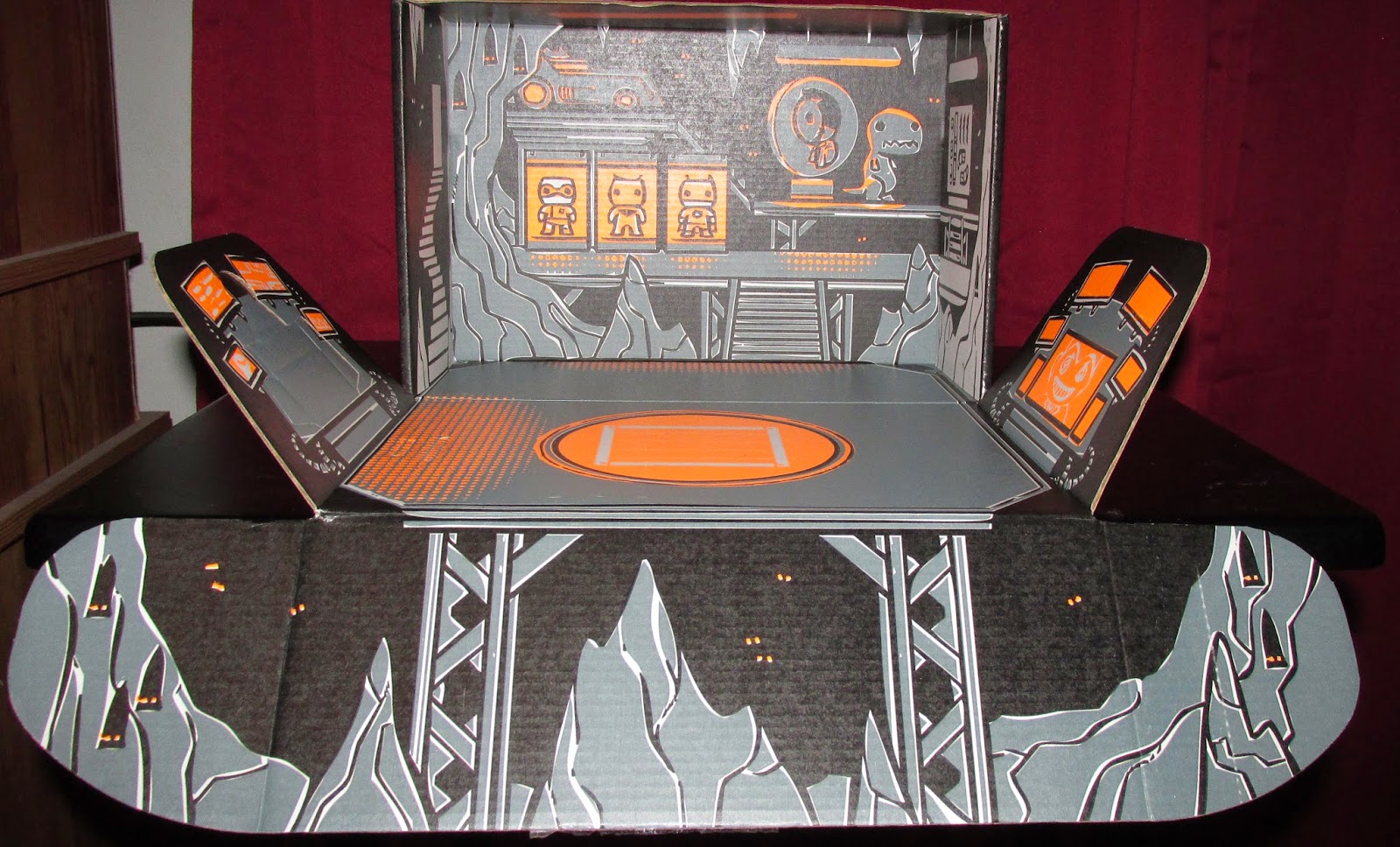 Loot Crate is keeping up with its box designs reflecting each month's crate. This month they turned it into the Batcave. 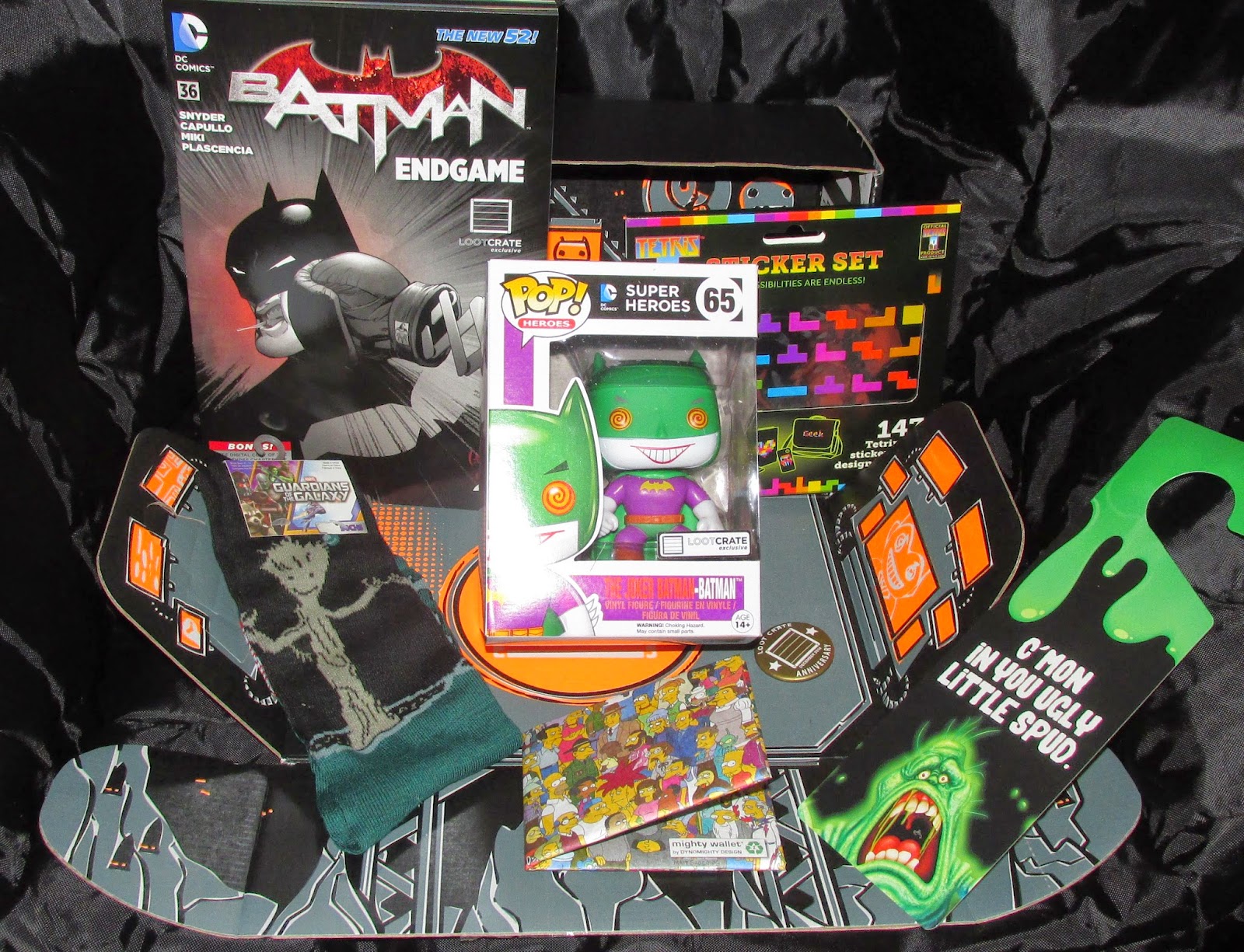 The Joker-Batman Pop alone makes this a pretty good crate. I also managed to get a few Christmas gifts out of it too. I would go with a 7/10. I just think they missed out on a great opportunity with the Ghostbusters anniversary. I would have liked a small tub of pink slime or marshmallow goop.